Ashes & Diamonds is one of the most exciting projects to recently hit Napa Valley. Instantly making an impression with their traditionally styled Napa Valley wines, which focus on terroir and classic California winemaking. The winery is located at entrance to Napa Valley, right off the main Highway 29. Its can’t miss zig-zag roof and portholes pay homage to the iconic California mid-century modern architecture. The gorgeous exterior is equipped with a state-of-the-art wine production facility, which is seamlessly integrated into this design.

With a successful background as a creative executive in multimedia and advertising, Proprietor Kashy Khaledi has worked for some of the most iconic Fortune500 companies on the planet. His work of bringing together brilliant personalities from a wide range of backgrounds to collaborate on new and exciting cultural experiences, has now expended into the wine industry. Kashy has assembled an extremely talented team of winemakers, which includes Steve Matthiasson, Diana Snowden Seysses and Dan Petroski, as well as winegrowers, Bart and Daphne Araujo to bring his vision of classically inspired Cabernet Sauvignon from the ‘60s and ‘70s to life.

We recently had the opportunity to taste the latest releases from Ashes & Diamonds, and were completely taken back, as the wines were nothing short of sensational. The work and dedication Kashy and his team has put into making these classic expressions is evident in each bottle. Readers who are visiting Napa certinaly don't want to miss a stop, weather it be to have the chance to experience these wines for yourself, or attend one of the A&D Q&A seminars, which take place at the winery every September. 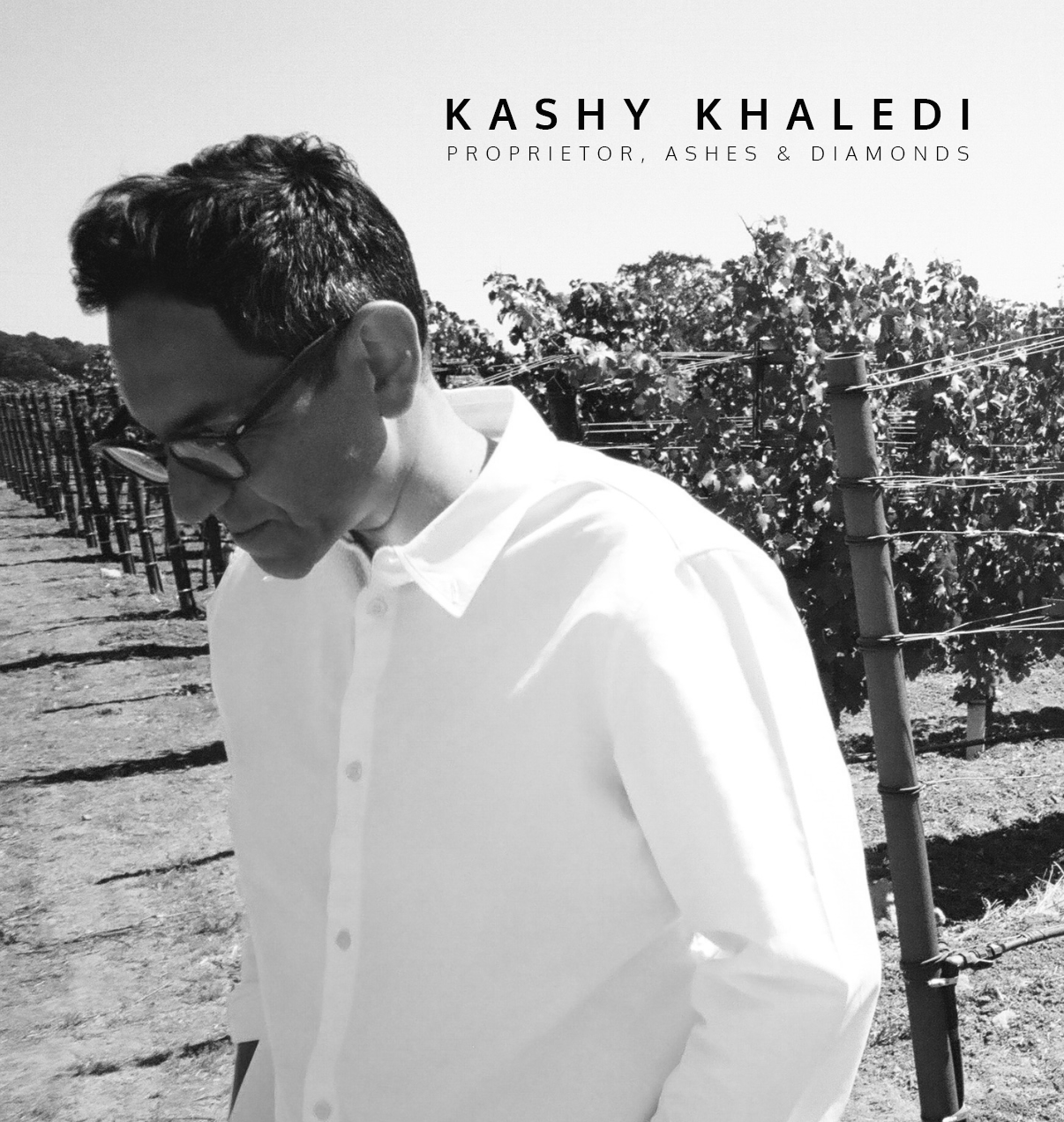 IWR: Why the name Ashes & Diamonds?

KK: Because “ashes hold the glory of a star-like diamond, the morning star of everlasting triumph.” It’s a passage from a poem written by 19th century Polish poet, Cyprian Norwid, and I first came across it in the 1958 film, Ashes + Diamonds, which is one of my all-time favorite films. The poem is an allegory for the tremendous pressure and stress carbon endures to become a diamond, not unlike that of grapevines to make great wine. If you break down the process from dirt to bottle in an elemental manner, it’s a marvel what the earth is able to push out. It’s no wonder wine was used sacramentally over centuries, and though I’m an atheist, it’s as close as I’ll ever come to believing in a higher power. Every spring when we bottle, when it all comes to fruition, I have to take a moment to pause at the miracle that is wine. And when I walk through the vineyard and stare at the dirt, I feel an energy that’s inescapable. Perhaps the higher power has been right under my foot all along.

IWR: How did you first get into wine?

KK: The bottle that stole my heart was the 1968 BV Georges De Latour Private Reserve. Having read about André Tchelistcheff in the book “Great Winemakers of California,” and the radical transformation he instilled in the valley, I became a bit of a zealot for that era – California midcentury. Reading about the details that led to the evolution of the region – little things now, big things then – like Robert Mondavi using stainless steel tanks for the first time, and how that information spread, made me realize how pertinent the community of winemaking is to its growth. It reminded me a bit of the community architects that created the Case Study Houses in California from that same era, and ultimately the era inspired everything we do from our style of winemaking to the architecture of the winery.

IWR: You had a very successful career in multimedia and advertising, why did you decide to make the transition and get into the wine industry?

KK: There’s nothing more depressing than a creative executive over 40. I get shit for saying that, but I don’t care. I was working at the Capitol Records tower in Hollywood at the time and saw kids running circles around me while I was getting paid quadruple what they were. They say, “lead, follow, or get out the way,” and I chose to get out of the way. Beyond that, I was living an extremely unhealthy, unsustainable lifestyle all while I had just had a little girl. I needed a change and wanted to build something tangible for her in an ever-digitized world – something she could hold one day and call her own. Quality of life is an important thread to this. I believe when enjoyed in moderation at the dinner table amongst friends and family, wine provides just that. It’s no mistake that our wines are so complimentary to food. And good conversation.

IWR: You have assembled an extremely talented team of winemakers and growers to work with, was there something specific that made you chose them?

KK: Steve Matthiasson and Diana Snowden Seysses make honest wines and embrace the nuance of a given vineyard or wine. If there’s something they don’t like in a given vintage, they don’t do additions, and instead do the work in the vineyard the following year. For instance, Diana didn’t like the nitrogen levels for one of our upcoming releases – “Mountain Cat Vineyard” Cabernet Franc, Mt. Veeder – so she worked with Steve and they planted chicken feathers in the soil to compensate for the deficiency. We do the work in the vineyard, not in the cellar because we feel a) it’s sustainable and b) we have a better chance at making age-worthy wines, which is our ultimate goal at Ashes & Diamonds.

IWR:We were completely taken back and impressed by the classic style of your wines, especially given the extremely warm growing conditions in 2015. The wines showed such incredible elegance, structure and finesse, definitely something not very common in Napa these days. What inspired you to make wines in this traditional style?

KK: Classic California wines from that era like Ridge Monte Bello, Mayacamas, Mondavi, and the like were such romantic expressions of terroir. If the act of creating art is a form of materializing expression then I see no difference between what Raymond Pettibon and John Baldessari did with paint and what people like Bob Travers and Paul Draper were able to do with their sites. And those two titans are inspirations for what we do at Ashes & Diamonds. When Paul Draper came to our speaker series, A&D Q&A, which happens every September at the winery, I nearly collapsed. It’s one thing that he made those wines, and it’s another that he did as long as he did and was unwavering in the face of fashion and financial pressure. This September, we’ll have Ted Lemon and Randall Grahm as our headliners, as well as some other surprise guests we’re planning. We’re excited to let people know that what we’re doing originated long ago by pioneers that are still raising the bar today.

IWR: Generally speaking, do you see the style of Napa Valley wine undergoing a change/movement?

KK: For some time now. People forget that Cathy Corison has been making beautifully restrained, yet delicious and honest wines for several decades. Then you had the new wave of producers like Matthiasson, Arnot-Roberts, Scholium Project, et al – and really, they were just a continuation of what Napa Valley did all along. Is it a movement? I don’t know, consumers continue to buy the Monsters of Rock equivalent of Napa Valley wines still, and I think that’s complimentary co-existence. Untucked Tommy Bahama wearing bros still need their high-octane Cabernet too and that’s good for everyone, believe it or not. Come one, come all, I say. Just get off the chemicals in the vineyards – there’s really no excuse for that nowadays. Carlo Mondavi, who makes a delicious Pinot Noir called Raen, is on a mission from God to influence everyone to do that with his Monarch Project. I hope he succeeds. Hazmat suits should only be worn on stage by Devo, not in the vineyard.

IWR: Other than your own team, who are some of your favorite Napa Valley producers today?

KK: Maître de Chai is a good one – it’s made by a young chap named, Marty Winters, who worked with us early on. Be on the lookout for him. Cruse is another good one – I quite like his Valdiguié, which was the OG Napa Gamay, of course. Also, anything that Aubrey Bailey and Colleen Fleming at Cadet Wine & Beer Bar recommend to me when I visit their place. I’m like Norm from Cheers in that place.

IWR: What is your vision for the future of Ashes and Diamonds?

KK: To make classic California wines and create a diverse environment for patrons to enjoy a postcard fantasy of the California Dream. The trade tends to overthink this – myself included – but the public just wants to have a good time and escape the digital massacre of fake news and dystopia they’re faced with every day. Have some fun, go outside and try some Napa Cabernet that doesn’t make you feel like an abandoned banana peel on the side of the road. This is Ashes & Diamonds.